Percussionists are weird people. It’s hard to maintain your sanity if you live in the same house as one. My brother’s a percussionist so I should know. My memory of our shared childhood years is of one continuous cacophonous din. When percussionists see objects—any objects—for the first time the question they automatically ask themselves is, ‘what noise will that make?’ They then proceed to hit it hard with whatever comes to hand—be it a knife, a fork or a hammer—in order to find out.

So, while growing up with Graeme was a nerve-wracking series of things that went bump in the day and night, at least we were only joking when we said the noise he made was enough to wake the dead. Your Korean percussionist is in a different league altogether, as we discover when watching this beguiling film, Intangible Asset Number 82 by Emma Franz in which Australian percussionist and drum virtuoso Simon Barker takes us with him on a journey to meet a Korean percussionist for whom waking the dead is just part of the fun.

This is difficult, mystifying subject matter to say the least, so it’s fortunate that Simon proves to be such a good tour guide. His admiration for the great percussionist/shaman Kim Seok-Chul is so profound, so passionate it’s impossible not to share it as he leads us through jungles, both real and metaphorical, until he finally tracks him down.

Along the way we meet some unforgettable characters, all of whom have the ability to challenge our preconceptions about art and life simply by being themselves. Bae Il-Dong for instance, is a sort of Korean Tom Waits who, when he bursts into song, sounds like about ten different singers at once, all letting rip into a sound system set at a level so ear-splittingly loud you’d be arrested if you turned it on in your car. But then, what else would you expect from a bloke whose idea of voice training was to live like a cave man for seven years, bellowing his lungs out in direct competition with the noise made by a waterfall for eighteen hours per day? Il-Dong doesn’t muck around. When he sings, you listen.

Personal hardship emerges as something of a common denominator in the lives of many of the Korean musicians we encounter.

Percussionist Kim Don-Won had his musical epiphany while being belted continuously for three months in a jail cell—a punishment meted out to him for having been reckless enough to play music at the funeral of a young man shot to death in a student protest. With an irresistibly endearing smile he relates the experience of coming to the decision to dedicate his life to learning traditional drumming techniques, describing it as his ‘most joyous moment’. With that sort of background, and given he’s as in awe of the legendary Kim Seok-Chul as Simon is, it’s not surprising that Don-Won feels the need to test the mettle of our Simon before volunteering his services as mentor and guide. Only after Simon passes his own baptism of fire does the journey begin in earnest.

It’s not often we’re given an opportunity to experience life and music through the eyes and ears of people who perceive them so utterly differently from the way we do ourselves but Emma Franz’s film tries to make it possible—and succeeds admirably. A female shaman, Jeong Sung-Dok explains that ‘the shaman is a holy tree between heaven and earth’ and who are we to argue? Later, when a jam session’s about to get under way and we’re waiting for someone to say, ‘a-one, a-two, and a-one two three four.’ Instead we get a dissertation on rhythm and why it’s a metaphor for life itself —’like breath, strong and gentle, not rigid’.

The ‘rough beauty’ of Korean aesthetic principles is revealed to us as it is explained to Simon and we see—and hear—it as a palpable, undeniable reality. 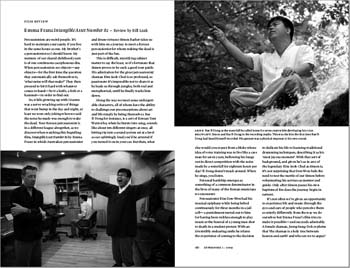 There is a very touching scene in which Simon and a band of Australian musicians perform with Dong-Won and Il-Dong. We witness people from vastly disparate cultural traditions communicating with each other at a very deep level. Deeper indeed – and more enduring – than that which would be facilitated by language.

Simon’s journey culminates in a meeting with Kim Seok-Chul himself, who turns out to be the Intangible Asset referred to in the title of the film. Living National Treasure would, I suppose, be the closest local equivalent for the term but, somehow, it lacks that certain mystical quality that Intangible Asset seems to contain. For Kim Seok-Chul, music is quite literally a bridge between the living and the dead and, due to a series of almost unbelievably fortuitous coincidences, Simon finds himself bearing witness to an intensely personal ritual, the like of which few westerners have ever seen before, and probably never filmed.

Emma Franz strikes the right balance between disinterested observer and passionate enthusiast in her film by allowing her probing camera to assume the first role while leaving the latter one to Simon Barker. He, in turn, provides the perfect bridge between our concepts of music and that of the traditional Koreans, and gently encourages us to cross it. His invitation will prove irresistible and you’ll be glad you accepted.

Intangible Asset Number 82 is the debut documentary by singer-turned-film-maker Emma Franz. The film has its Australian Premier at the Melbourne International Film Festival in August 2009.